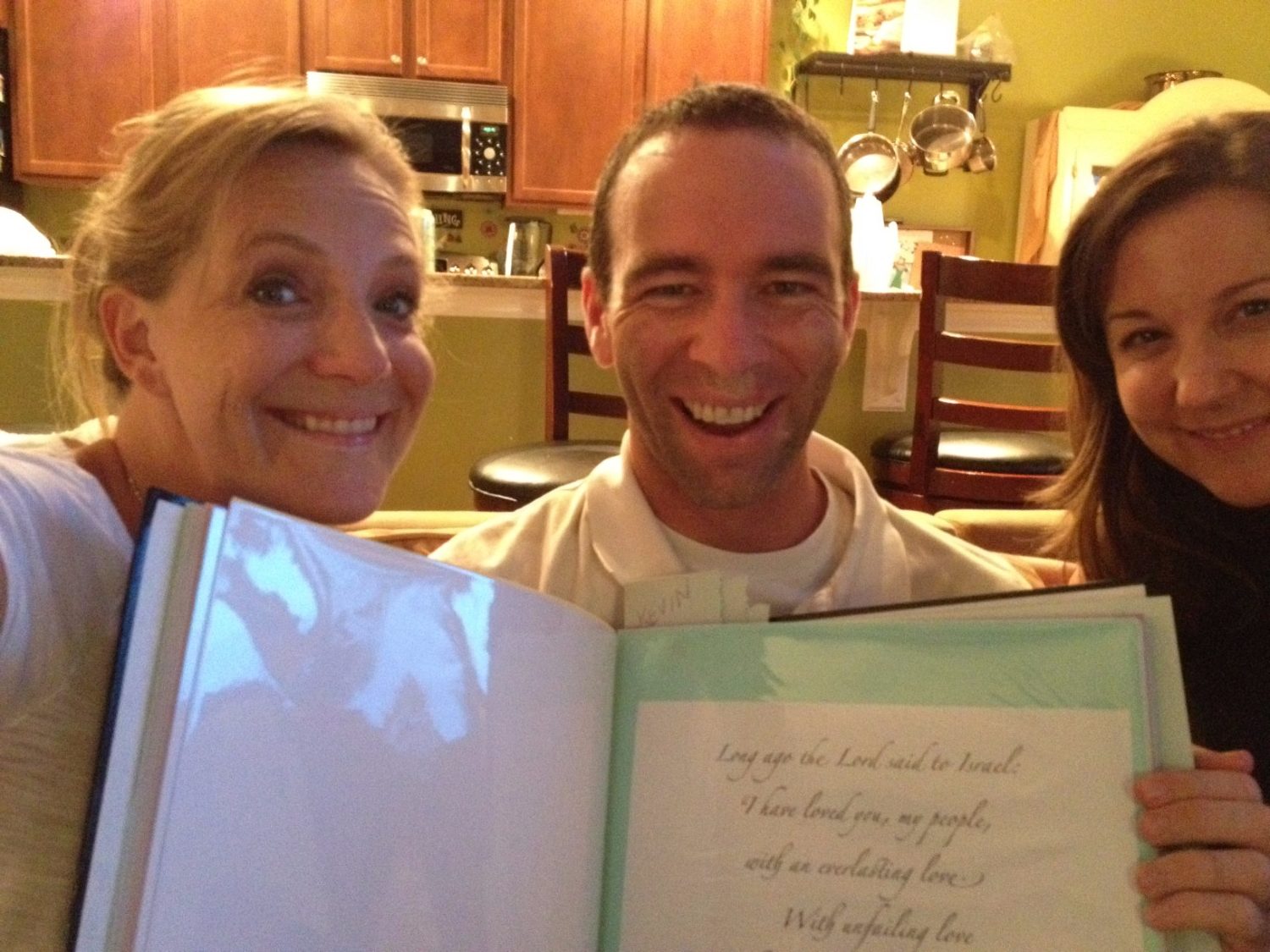 The past few weeks have continued to be full of many sweet celebrations with Sophie and we are filled with many emotions as Sophie’s due date quickly approaches.  Here’s a recap of some of the celebrating that’s been had by the Dennis family 🙂

One of my best friends, Jess sent us a card with what week 35 would entail.   She invited us to dinner and had us each (Sophie included 🙂 ) bring a promise from the Lord that had been significant to us.   In  a world filled with often promises left unfulfilled, broken, empty, it can be hard to believe that there would be anyone whose promises you can trust fully.   Yet, this is the truth of the God we serve.  He is a promise keeping God and His word is filled with promises to His children that will never be broken.   In the Lord’s sweetness, being reminded of God’s promises during this particular week was hugely significant for me.   It seemed that every time I opened the Word He was leading me to more of His promises.   I want so badly to see written in stone a promise to us from the Lord that our daughter will be healed, but though that is not a promise to us, there are many promises that God gives that are even richer than that promise could ever be.   We headed to Jess’ to dinner, enjoyed a delicious home cooked meal (which I miss from Jess and the days we were roomies :)), and then were presented with a book filled with promises from the Lord.  Jess had asked friends and even people we didn’t know to write some of the promises of God that have been significant to them and their own stories.  As we read through each page, we were encouraged beyond words at the ways in which people shared their lives with us and the ways God showed Himself faithful to them.  Kevin and I then shared the promises that have been especially meaningful to us.  These promises are words of truth that we have clung to through this season and others and remind us when our feelings tell a different story, when circumstances don’t make sense that our God is trustworthy and true.

“Have I not commanded you? Be strong and courageous.  Do not be frightened, and do not be dismayed, for the Lord your God is with you wherever you go.” – Joshua 1:9

“As it is written ‘I have made you the father of many nations’ – in the presence of the God in whom you believed, who gives life to the dead and calls into existence the things that do not exist.” – Romans 4:17

This passage so struck me several months ago that I wrote more about it here.

“For you formed my inward parts; you knitted me together in my mother’s womb.  I praise you, for I am fearfully and wonderfully made.  Wonderful are your works; my soul knows it very well.  My frame was not hidden from you, when I was being made in secret, intricately woven in the depths of the earth. Your eyes saw my unformed substance; in your book were written, every one of them, the days that were formed for me, when as yet there were none of them.  How precious to me are your thoughts, O God! How vast is the sum of them!  If I would count them, they are more than the sand.  I awake, and I am still with you.” – Psalm 139: 13-17

We are clinging to these promises and many more as we walk with the Lord through this season and whatever He has for us in the coming weeks, months, years.  And are so thankful at how other’s have shared their own stories of the promises of God becoming more real to them through the journey’s He has had them on.

Jess, Kevin and I with our Promise book!

On a lighter note, we had just been to our Dr. that week and they had est. Sophie was about 5lbs… I raided Jess’ cabinet to try to find the equivalent and well… 2 large PB jars was what I could find 🙂

Kevin and I were able to head to a hotel nearby for a wonderful stay-cation where we enjoyed relaxing by the pool and introducing Sophie to the lazy river at the hotel… which she thoroughly enjoyed multiple times!  I figured out how I can lay on my stomach (which fit perfectly in the inner tube), since I have been dying to do that (though getting in it was a bit comical)!   Awesome friends of ours Amanda and Felicia got us a groupon to go kayaking which we are so excited to do… it’s one of my favorite things to do as anything by the water brings me such joy and refreshment!   Kevin’s brother and family sent us some supplies to do their favorite past time with Sophie… camping!  While we haven’t officially camped (I’m pretty sure that would put me in a bad mood right about now 😉 ) we’ve gotten to do a lot of the components.

sunset from our room at our stay cation!

Campfire popcorn! And yes, he has a headlamp on… why? Because the lights were off and we were simulating being at a campfire 🙂

Later that week we went to a real campfire 🙂

And Sophie had her first s’more!

Deb and Bill (our pre-marital counselors), and their daughter Christine helped us celebrate week 37 by checking off one of our 30 by 30 list items “Create a work of art”.  We had so much fun with them at a local pottery and jewelry making place.  Kevin created an “S” with Sophie for her room and I created a little bracelet I had been wanting to make her for when she’s born.   Later we enjoyed one of the Moline’s family traditions… making homemade pizza’s together and watching a movie!  It was such a sweet and refreshing evening!

Creating our “works of art” with Sophie!

Deb, Christine, Kevin and I

The bracelet I made for Sophie with her initials… so sweet and so tiny!

Our sweet friends Jess, Lucky, Evangeline and Marc left a package at our door filled with goodies and things to help us getaway and do something relaxing with Sophie.   I grew up going on family mystery rides which is something that Kevin and I have been wanting to do with Sophie.   We decided this would be the week to take her on one!  I remember LOVING mystery rides as a kid.  You never knew when you were going to go on one and then one night my parents would say “Ok kids, we’re going on a mystery ride!”  We’d all hop in the car and try to guess where we were going, sometimes my parents would trick us with the roads they would take so we couldn’t figure it out and sometimes they would give us clues… sometimes.  Whether it was heading to get ice cream, mini-golf or pizza they were such fun memories!   Kevin and I had decided since Sophie loves popsicles (and maybe mom is slightly obsessed with them too) we’d take her to get some gourmet popsicles and feed the ducks in downtown Orlando.  So, we took some of the goodies our friends left us with (for ourselves, not the ducks), some bread and headed downtown!  On the way downtown, Kevin had created a little playlist for Sophie which held clues to where she was going.  Sophie did a pretty good job guessing, but may have been slightly influenced by her mom.  We still didn’t tell her where we were going and made her wait for the surprise, I’m sure she was ecstatic!

Delicious! Mine was cantaloupe and mint and Kevin’s was orange dreamsicle. Yummy!

Popsicles by the lake!

Feeding the ducks… and birds because they kinda took over.

Our celebrations continue to be full of moments of tears, joy and lots of laughter.  We are so so thankful for those who are continuing to help us celebrate Sophie’s life in such fun and unique ways!

P.S. Mystery rides are not just for kids 🙂 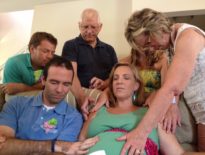 Sophie More Than a Sad Story 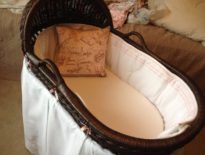 Sophie Faith, Dreams and a Bassinet