I’m super excited about this post today.  A few days ago, I was sitting with two of my closest friends, Jess and Julie, at one of our (mostly) weekly times together where we process life (the raw and honest stuff) and speak into each others lives in the areas we are struggling in and needing encouragement.   Both of these women have been a source of huge encouragement in walking through life over the last several years, but especially in walking through these seasons with Sophie and Dasah.  We have wrestled together with thoughts on healing, who God is, how he works and how to trust him in the heartaches of life.   On Thursday morning, Jess began to speak some things she was learning through the story of Acts 3 on the power of the name of Jesus.   It was challenging and convicting.   My husband, Kevin ends every prayer with a declaration of the power of Jesus’s name and you can tell he means and believes every word of what he is saying and who he is talking to, I love how even his prayers remind me of the power of the name of Jesus. So, I continue to be so thankful for how God uses my friends and family to lift my eyes to a greater view of Jesus as we authentically wrestle together with the Lord and find ourselves knowing him more deeply as a community.  That said, I asked Jess if she would write her thoughts on Acts 3 and how they have challenged her in the things she has been wrestling with in light of our story with Sophie and Dasah.   You can find more of her writings at www.jessicabott.com   I hope you enjoy reading her thoughts on Acts 3 as I have!  (Thanks Jess for being my first guest post contributor!!)

What’s In a Name?

Today I walked through a garden and my thoughts drifted back to the first Garden. I wondered what it was like for Adam and Eve to walk in perfect peace and confidence in the cool of the day with the Lord. Personally, I strolled, like turtle-pace-slow, through the lovely paths surrounded by countless plants this afternoon. Not wanting to rush it, I chose to savor the beauty and communion of the moment. I cried as I continued the conversation I’ve been having with the Lord for these past 20 months regarding Sophie and now, Dasah. “What is it that You’re doing?” I asked for the thousandth time.

In John 1 the Apostle John tells us how in the beginning, the Word was with God and the Word was God. The Father created through the Word, the Word gave life to everything that was created, and His life brought light to everyone. So much light, in fact, that the darkness can never extinguish it. My small group reached Acts 3 this week. I sensed the need to invite everyone to ask these questions before we met:

Lord, what is it about speaking things in Your name?
Do I do it?
When?
Why?
What does it mean to me?

The retelling begins with Peter and John heading to afternoon prayer time at the Temple. On their way they encounter a man who has been lame since birth. His family leaves him at the Temple gate (called “Beautiful,” a meaning not lost on me right now) as they head in to commune with their faith-family and worship the Lord. Luke is telling the story and he says how the man asks Peter and John for money; noticing him, they look at him intently, telling him, “Look at us!” He looks eagerly in their direction thinking they’re going to give him money, but Peter simply states, “I don’t have any silver or gold for you, but I’ll give you what I have. In the name of Jesus Christ the Nazarene, get up and walk!” Peter reaches out and pulls the man up and, as he is in motion, his feet and ankle’s are instantly healed! It’s no surprise then how the people who know the man and his condition are amazed when he is presented to them, healed. The story continues here:

Peter saw his opportunity and addressed the crowd. “People of Israel,” he said, “what is so surprising about this? And why stare at us as though we had made this man walk by our own power or godliness? For it is the God of Abraham, Isaac, and Jacob—the God of all our ancestors—who has brought glory to his servant Jesus by doing this. This is the same Jesus whom you handed over and rejected before Pilate, despite Pilate’s decision to release him. You rejected this holy, righteous one and instead demanded the release of a murderer. You killed the Author of Life, but God raised him from the dead. And we are witnesses of this fact!

Through faith in the name of Jesus, this man was healed—and you know how crippled he was before. Faith in Jesus’ name has healed him before your very eyes.

What is it about His name? Peter tells the crowd that this man was not healed by he or John’s power or godliness. He tells them how the Author of Life, the Word through whom all who were created came into existence, the Word who was then made flesh, was raised from the dead. Now, this miraculous moment is made possible through faith in the name of that very One: the name of Jesus. Faith in the name…

My small group talked about how sometimes we don’t invoke His name for fear of disappointment that the outcome won’t be what we hope. We discussed how rote it can be to use it — perhaps it has become only a simple way to end a prayer instead of a name which carries such power, even power to raise dead things to life once again. Someone else suggested how a name with a good reputation carries much weight with it and another, how as followers of Jesus, we are called His Ambassadors and carry all of the power of the Kingdom of God with us to the places where we’re sent.

We talked about the sheer confidence of Peter and John. For me, it can be very easy to assign the miracles of Jesus to the reality that He is God, so of course He can heal and of course He knows what’s going to happen. No question there. Though He laid down His rights when He came to walk among us, He was fully human and fully God so it was “easy” for Him to heal. And, I know He told His followers how we would do greater things than He did. Yet still I’m amazed to to see the confidence of these two Apostles. They aren’t God, but they stepped into the moment fully understanding God’s intentions, His heart and what the world He created was to look like going forward. They offered the lame man what they had.

See, we’ve come a long way from that Garden these days. God, in His kindness, blocked the way back so we wouldn’t live forever in a separated state. He wanted relationship with us and set out to make things right so we might be reunited with Him. How is it then that I forget how Jesus has come and has made all things possible? In His name, darkness flees. In His name, the lame walk. In His name, the sick are healed. In His name, the captives are set free. In His name, the dead rise.

Here’s where my head goes though…

But, none of that adds up with what happened here in Acts 3. Even Peter and John knew they didn’t have the power or the godliness to accomplish this man’s healing. Instead, they simply teach us how they had faith in the name of Jesus. It was all on Jesus, not on them. They didn’t plead, they didn’t ask, they just spoke it out and offered a hand. They believed God. They knew His intentions. They understood something about the Kingdom of Heaven that I’m still learning. One of those other pesky things Jesus said has to be this… “On earth as it is in Heaven.” What does that truly mean today?

Believe me when I say how my dear friends and I have discussed what all of this means as it relates to Sophie. Can I just be honest and tell you, I don’t know. I don’t get it. But, I told Lindsey month’s ago… I think Sophie would be so thrilled to see her sister healed here and now. I don’t think she’d feel like she got the short end of the stick. I’m the one who thinks that some days. Genuinely though, I think she’d be cheering us on as we press into the Lord seeking to understand what these things really mean because Sophie is seeing things we can only dream of seeing and understanding right now. Pretty amazing. And… I miss her.

Jess (left), Julie and I… love these women!

“Only Jesus Can” by Vertical Church Band

“Your Great Name” by Natalie Grant

Teaching Them to Hope, Birthday After Birthday.
November 9, 2014

“Will You Carry This Too, Lord Jesus” – When the Weight of the Pain in Our World is Too Much to Bear
November 9, 2014 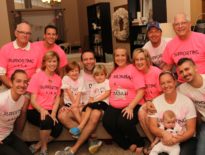 Dasah The Night Before, and So We Worship. 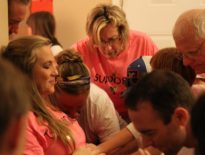 Dasah We Call…and He Comes. How You Can Be Prayin…